I've been playing around with Ancestry.com's new wills and probate collection. The indexing isn't all it could be, as for example in Pike County, Illinois the search finds one of my ancestors, but the image that appears is the index page in the Will Book. There's a number next to the name. Nothing tells you that number is a page in that book, and you can go to the page by scrolling through the rest of the film strip. I found my great-great-grandfather's will that way. But not one for the Pike County Bonnells.

In the name of God Amen, I Aaron Bonnel of the Township of Crosby in the County of Hamilton and state of Ohio being weak in body but by the blessings of God of sound and disposing mind and memory do make and ordain this my last will and testament in form and manner following, viz I will that after my just debts and funeral charges are paid that my loving wife Rachel Bonnel shall have the use and disposal of all my property both real and personal during her natural life if she shall so long remain my widow. And after her decease I give and bequeath all the remainder of the personal property that shall be left after her decease to be equally divided amongst all my children and likewise all my real estate to be divided in like manner amongst all my children and if any of them shall die during my lifetime then in that case their respective shares to be equally divided amongst all their children. And I do hereby constitute and appoint my loving wife Rachel and my trusty friend Ortniel Sooker executors of this my last will and testament. In testimony whereof I have hereunder set my hand and seal this thirtieth day of October in the year of our Lord One thousand eight hundred and thirty three. Aaron Bonnell (seal) Signed, sealed and delivered in presence of us Orthniel Sooker, Pamela Sooker, B.F. Sooker. Thereupon on the 15th day of October A.D. 1837 Orthniel Sooker, B.F. Sooker, now of the ? being witnesses of the last will and testament of Aaron Bonnell, deceased, personally appeared in open court and were duly sworn under and examined according to law touching the due executors of said will as appears from the endorsement theron as follows.
Proved by Orthniel Sooker, F.B. Sooker, two submitting witnesses. Will admitted of Record Oct. 1, 1837 Wm. H. Harrison, Clerk
Now here to wit on the same day our said Court made an order herein as follows. It is further ordered that said will and the Probate thereof be Recorded and the same is now done and that said record shall have the same force and effect as said orig. will record.
Herman Goebel, Probate Judge 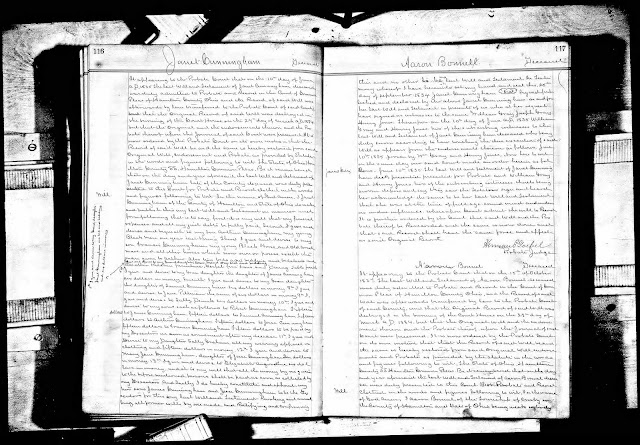 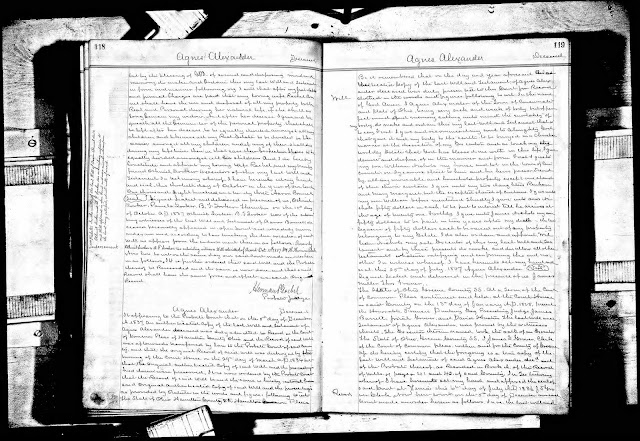