William Bonnell in the Virginia Militia

Overall, the documentation on the Virginia militia is extremely sparse and fragmented. There will probably be tens of thousands of patriots who will never receive acknowledgement of their militia service due to the paucity of these records.

In one of the few lucky breaks we've had in this search, however, there are some unique documents that give us insight into the militia companies in the south half of Spotsylvania County.  This is a group of petitions from 14 November 1776 by the seven militia companies from the southern half of the county complaining of having to march to Fredericksburg, at the northern edge of the county, to respond to their muster. 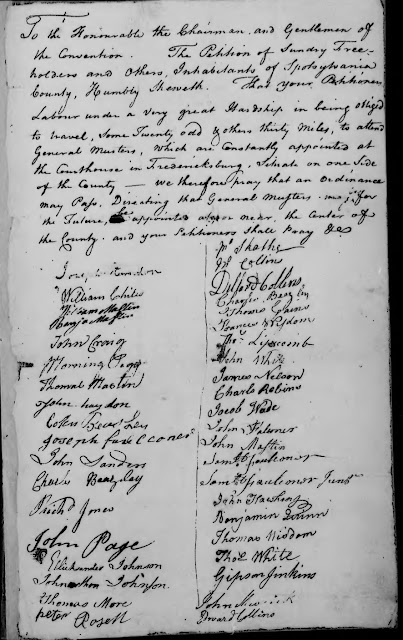 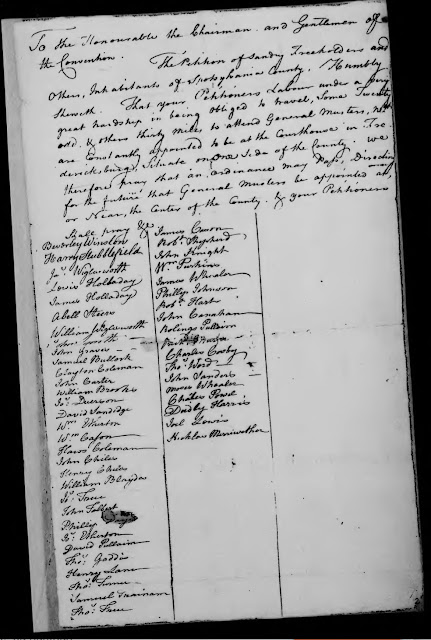 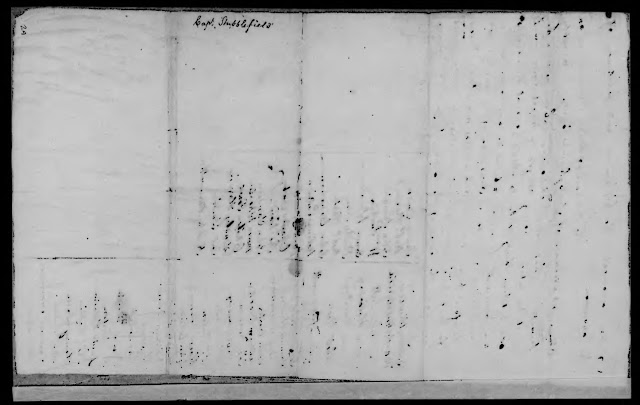 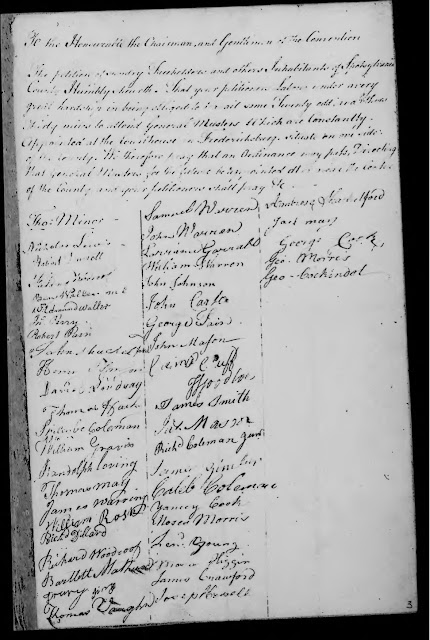 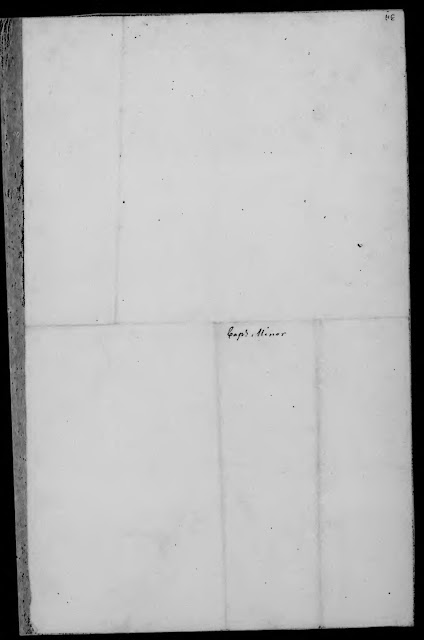 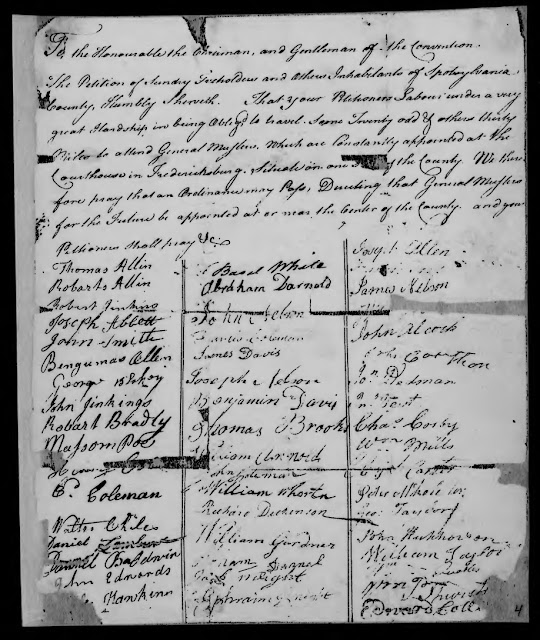 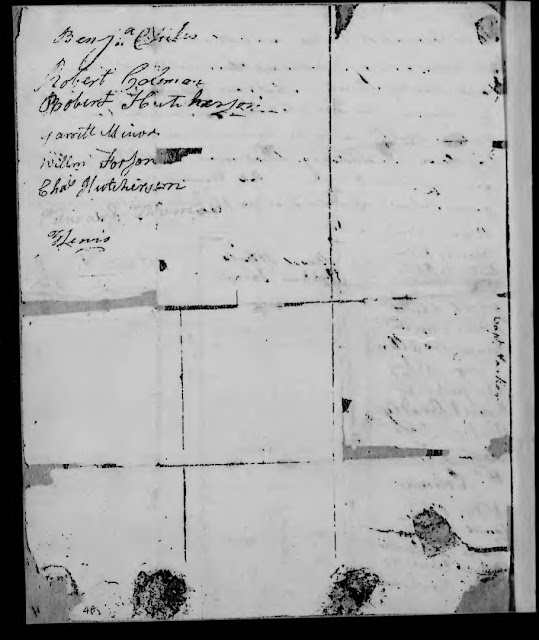 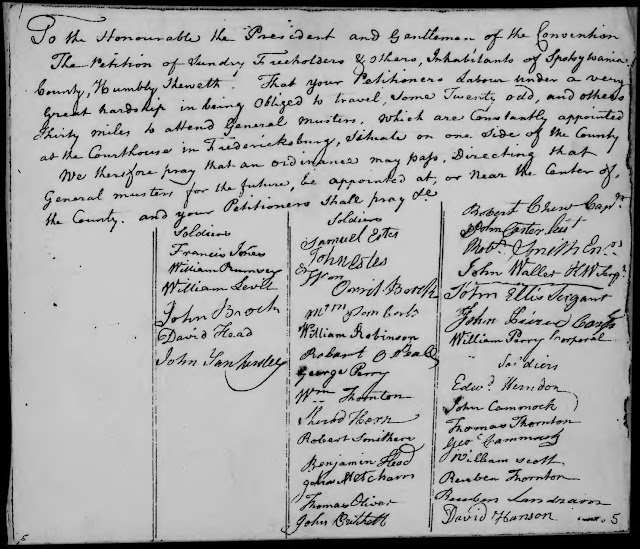 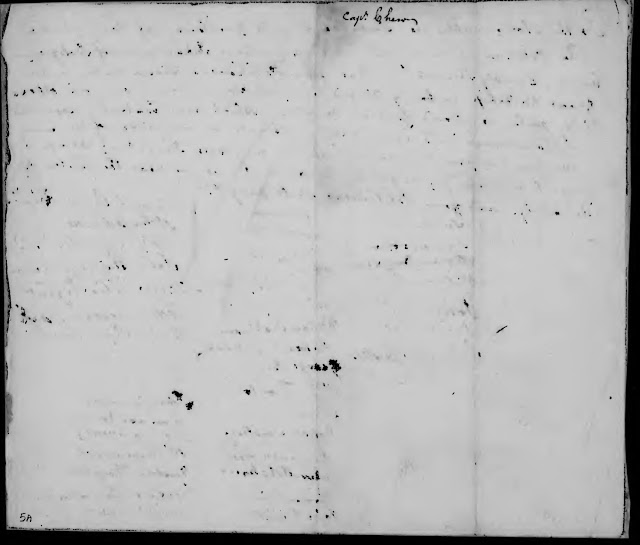 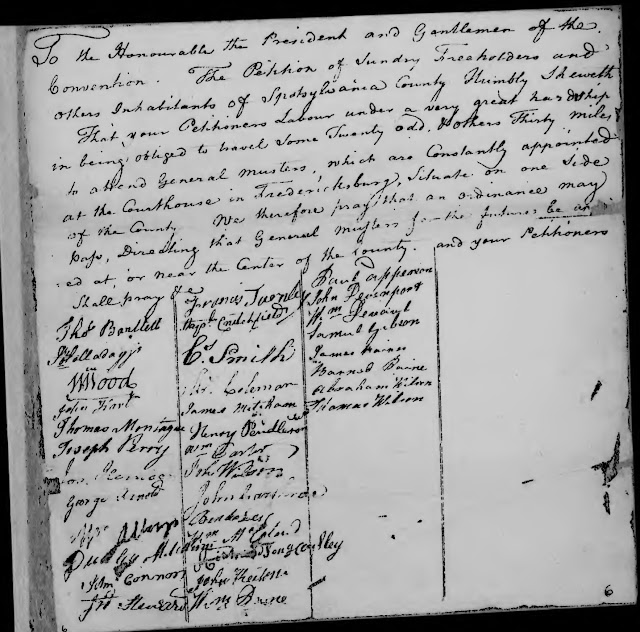 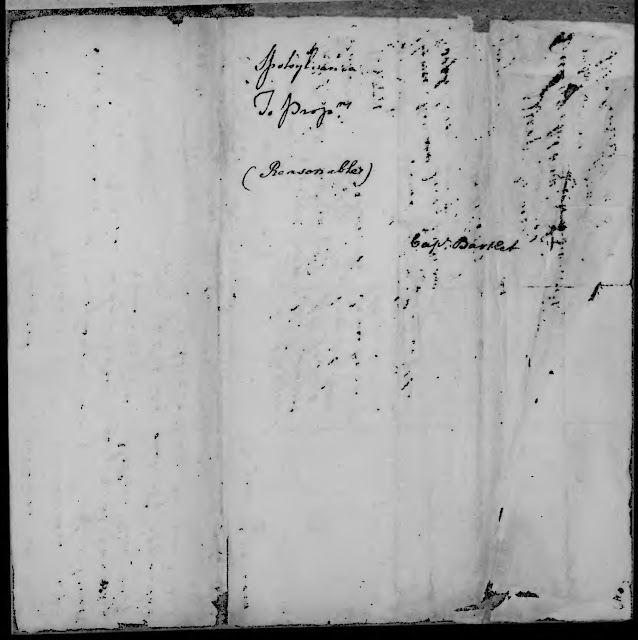 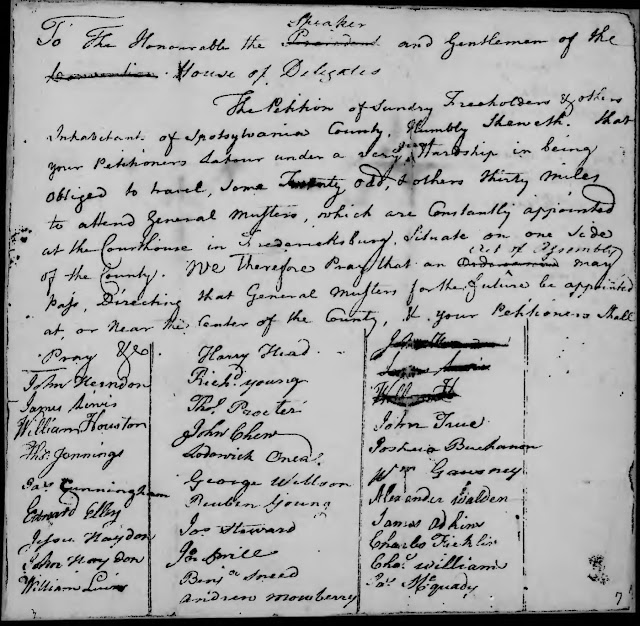 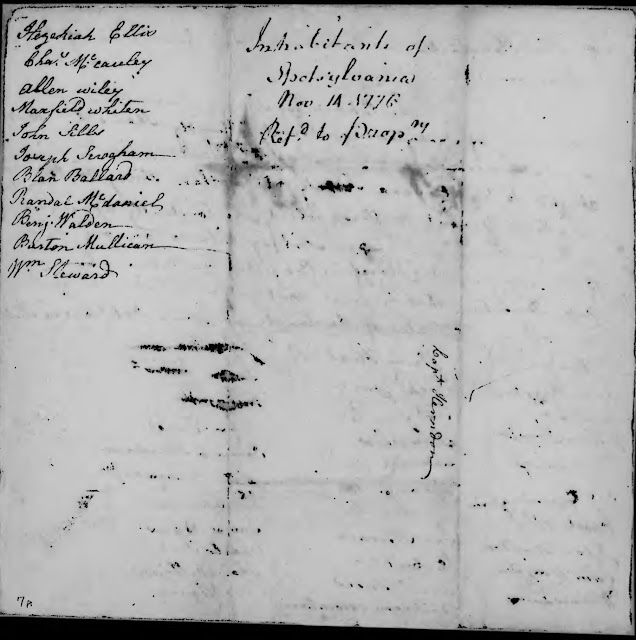 William Bonnell is not on any of these, but some of his contemporaries are.  Peter Rossell signed on the petition as a member of Captain John Craig's company.  Although the document is damaged, Henry Coleman appears to have signed on the petition for Captain Alexander Parker's company.  It is impossible to tell for sure, but the number of signatures on each of these documents seem too small to constitute a company, so I'm not convinced they represent the full complement of these militia units.

This volume uses the pension statements for those few militia members who lived until the 1835 pension law (the only pension the militiamen were eligible for) to gather additional details about the militia companies. McAllister's analysis shows that all seven of the southern Spotsylvania militia units (John Craig's, George Stubblefield's, Thomas Minor's, Alexander Parker's, John Chew's, Thomas Bartlett's, Herndon's) saw active service in the Revolution.  The actions of some of these companies ares pecifically known.  For others, they were probably a part of the general mobilization of nearly all Virginia militia units that occurred for the battles between Guilford Courthouse and Yorktown.

The next step for us to now take, therefore, is to do a deep dive into all seven of the southern Spotsylvania militia companies, focusing first on Craig's and Parker's.  It could be that we will never find out more than I have included here.  However, I think there is the chance that we could figure something out by analyzing the petition lists against the militia pay records.  There are tens of thousands of pay entries to militia soldiers in the Virginia Auditors Account books, and I hope these are catalogued in the two Ekenrode volumes (we'll need to verify this, I don't know how we would find anything if Ekenrode only catalogued the line units).  If a group of these individuals show up together on the same pages of the Auditor's Accounts, for example, we may have a lead on the pay record for the entire company.

Also, I imagine there will be additional information in Spotsylvania County.  The order books, for example, list the appointment of militia officers.  Now that we know exactly what companies we are looking for, there may be information here that did not catch my attention when I reviewed these books a couple of years ago.  I'm certain William Bonnell is not mentioned (I would have caught that), but we may be able to get an idea of how comprehensive the petition lists were.

George Faris adds: "Since all able bodied men were required to serve in the local militias it seems probable that he was in one of the militia units in Spotsylvania.  However, since they appear to have lived very near the county line, it's also possible that he was in an Orange County militia unit. Most of the militias were primarily concerned with protection of their own local areas although some were pressed into service with the regular army units when necessary.  Some of these units, as well as some of the Virginia and Continental Line units don't seem to be documented very well.  I've been frustrated in searching for any records of the service of William's future son-in-law John Farris who did apparently serve in a unit of the Virginia Line with action at the battles of Guilford Courthouse and at Yorktown.  In the latter action he was under the command of Col. Charles Dabney whose estate "Aldingham" was just across the South Anna River from where the Farrises lived in Hanover County, VA.  These and other details are in his 1834 pension application (R3455) which was rejected because records of his service couldn't be found at that time.  I mention this to point out that a lack of service records for William Bonnell in one of the regular army units doesn't necessarily mean that he didn't serve."


Charlie Bonnell reported: "I checked my copy of an index of the Militia in Washington County, VA Officers: 1777-1835, Militia Men 1798-1835. Washington Co. is a long ways from Spotsylvania and Orange Counties, but I figured I’d check the names. If nothing else, you can file this away for future research when y’all have finished this project.

There were two Faires’ serving as officers between1782 and 1806. No Bo/Bunnells

There were 10 Farris Militia Men serving between 1798 and 1825. There was one Bonnell (Douglass) serving in 1834. Claude’s database has no info on any Bonnell/Bunnell in that county during that time period.

George Faris replied: I think the William Bunnell and John Farris families may have passed through Washington County without stopping during the summer of 1798 on their way to Mercer County from Botetourt.   There were Farrises in Washington and Russell Counties for many years before and after that time - but they were not related to the John and William Farris associated with the William Bunnell family.  In researching William and John Farris it was necessary to sort through thousands of Farris records in KY and try to sort out the very few that involved that particular William and John.   There were numerous Farris families throughout KY and back into VA - but I never found any that appeared to be related to them.  Later, when numerous Farrises did Y-DNA tests we found that our Farris line was not at all related to the others. The majority of the VA/KY Farrises were related to each other and appear to mostly be descendants of an Ian Esom Farris - except for this particular John and William.  I've never found any other close relatives to them except for a possible sister, Sally Farris, who married a John Howe in Franklin Co. KY in 1795 with William Farris as the bondsman.  William had migrated to KY many years prior to the William Bunnell and John Farris families - but rejoined them in Mercer County after their arrival in KY.
Posted by Margaret Watson Rutledge at 3:08 PM