Increment 20: Will of John Severns and Land Sale to Nathaniel Fitz Randolph

Here is the last increment of documents procured from my quick, wave-top-level search of the New Jersey State Archives.  They are two secondary source documents.

The first is the will of John Severns of Trenton, New Jersey.  It mentions Samuel Bunnel as an individual to which the estate was indebted.  It looks like Severns was indebted to just about everyone in the county.  That is, however, except for Jacob Wright and Peter Rossell, who are not listed on the following pages.

The second document captures a land sale to Nathaniel Fitz Randolph from his father.  The witness is listed as “Samll Bumill (?).”  I am convinced that this was one of the Samuel Bonnells.  First, the spelling with an “i” and the contraction that looks like “Sam’ll” is what we have seen on almost all of the other signatures.  Second, Samuel Bonnell and Nathaniel Fitz Randolph were co-jurors in the 1764 inquisition.  Third, Samuel Bonnell provided evidence for the King in the road and bridge maintenance case along the King’s Road that eventually resulted in the writ against two other Fitz Randolphs, Richard and Eseek.  The fact that this document also alludes to the Randolph property being along the King’s Road reinforces the fact that all of these are related.

The two entries for the Randolphs, which appear to address the same property several years apart, provide quite a few clues as to the location.  The position adjacent to “Prince Town” aligns nicely with our knowledge that the Bonnells were living near Penn’s Neck in the 1750s.  The other property that straddles the Middlesex-Somerset line along the King’s Road may indicate that both families lived very close to the line and provides a clue as to why the Randolphs were responsible for the maintenance of a section of this road.  If both families were relatively close to the county line, this may provide some insight as to why the debt document in which Samuel Bonnell, Jr. was the codefendant during this same timeframe (1730-1732) was prosecuted in Somerset County.

I think this will be all from the Middlesex chapter until one of us can get back to New Jersey for a closer look.  We have made tremendous progress and I am fairly certain we have properly reconnected the Kentucky Bunnells (an amazing achievement, although we will still need to look for more confirmatory evidence).  Nonetheless, there are still many unclear questions from the New Jersey chapter.  In particular, we have not untangled Samuel Bonnell Sr. from Samuel Bonnell, Jr. on many of the documents in the 1740s, 1750s, and 1760s.  After this, it still seems that there are not enough Samuels to account for the length of activity around the Windsor / Trenton area, particularly the appearances that extend well into the 1800s (maybe there was a Samuel III, brother to William?).  Also, we still need to sort out the Isaac Bonnell from Perth Amboy who was the Sheriff of Middlesex County during the 1760s and 1770s.  Finally, we are all waiting expectantly to see what Margaret has to report from the Woodbridge document regarding Samuel and Sasanna from 1707.  I imagine all of this is discoverable, as the harvest from my hurried and undoubtedly incomplete search illustrates that Middlesex, Somerset, and Hunterdon Counties have not been thoroughly researched.

Until such time as we get new information from New Jersey, I’ll start working back through the William Bunnell story from end to beginning in an effort to clean up loose ends and ensure the documents are available for wider collaboration via Ancestry.com.

Regarding the John Severns will, while the wording is not definitive, I think this is a list of debts owed to him rather than the other way around.  Severns was a fairly wealthy merchant in Trenton and also apparently a money lender according to descendants of other people on this long list of accounts.  The list extends for another 1-1/2 pages.  Pages 426 and 427 are attached.  It's interesting in that many of the people are listed by their occupations, locations or other descriptors such as "the lame man", "Jasper's son", "widow's son", "great", "small", "old", "baker's son", etc. 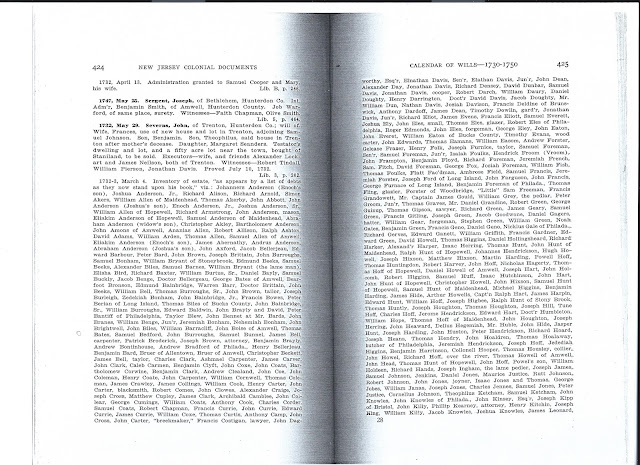 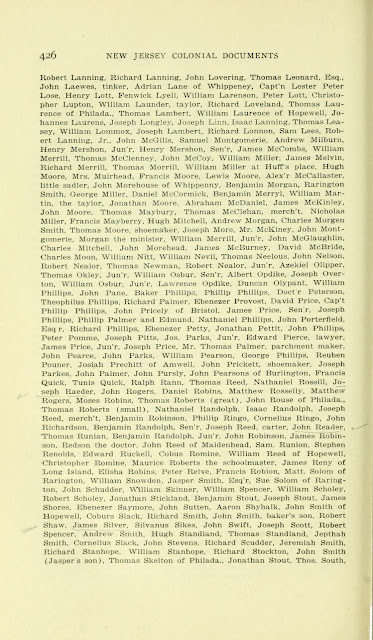 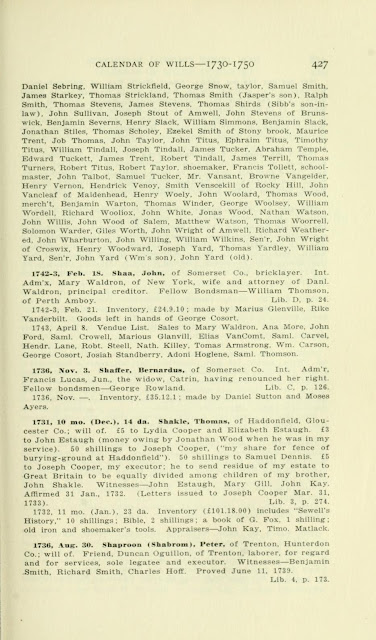 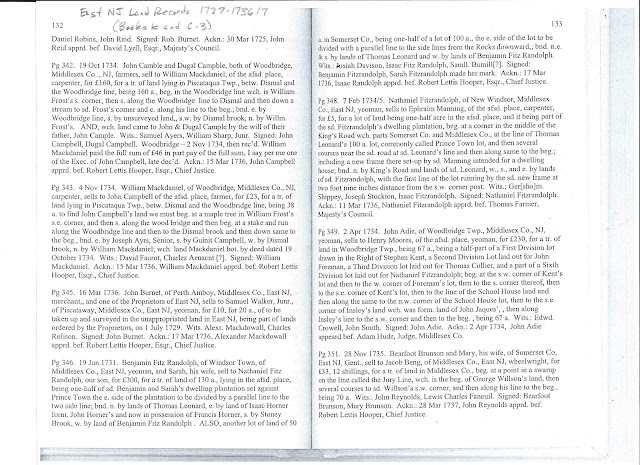