Sorting Out the Samuel Bunnells of Middlesex County, New Jersey

I apologize for the delay in correspondence, as things have been very busy at home and work.  While I was able to find several more pertinent documents during my last trip to the New Jersey State Archives, I have not been able to scan and transcribe them as I did with the first bunch.  Since I don't know when I will get to that, I'll provide an interim summary of my conclusions.

The more documents I find, the more I become convinced that we are actually dealing with three generations of Samuel Bonnells in Middlesex County New Jersey.

To explore this theory, please refer to the attached spreadsheet,(see below) in which I have reorganized the New Jersey documents into chronological order.

With this, we can see that the differentiation between a Samuel Senior and Samuel Junior happens at two points.

Looking at the ages of the two Samuels we have identified to date (Nathaniel's son, b. ~1675, and grandson, b. 1707), they would have had to have been both very long lived and very active into their elder years to account for all these references.  Indeed, the last reference of them together, in 1761, would require the older Samuel to be still active at 86 years of age.

I think a more likely scenario is that the Samuel born in 1707 had a son likewise named Samuel in, I propose, about 1738.  This individual would have been the older brother of William Bonnell of Mercer County Kentucky.  The birth year is based on the fact that he first begins to appear in the public record in 1755, at which time he must have reached the age of majority.  I believe he was still connected to Samuel (2) at least through 1761 (same house and business, perhaps).

Although writs are written against both of them, the court minute books list only the suit against one of them, presumably the father.

The other argument for this theory is that it explains the continuing presence of a Samuel Bonnell in New Jersey after 1707-born Samuel is already established with William in Virginia.  The spreadsheet is color coded to show what I believe to be the most likely "owner" of each of the documents we've collected.

Based on the above, I would offer the following as "provisional biographies" of the three generations:

Samuel Bonnell (1):  This was the individual that we already know of from William Austin's work.  He is the son of Nathaniel, born in Elizabeth Town, Essex county, in approximately 1675.  As we have discussed in the past, he appears to have divorced his first wife with whom he perhaps had a son Benjamin.  He then appears to have married Susannah, with whom he parented son Samuel (2) in 1707 after relocating to Woodbridge in Middlesex County.  The family appears to have relocated to Somerset County sometime before 1728.  The last document that probably relates to this individual is the will of John Balm in 1739, when he would have been approximately 64 years old.  Unfortunately, all records of this time from Somerset County were destroyed in a courthouse fire, which is probably why this search is so difficult.  (The Somerset court documents we've found only exist because they were later prosecuted in other counties.)  It is possible, therefore, that Samuel (1) died in Somerset, with the record now lost.

Samuel Bonnell (2):  According to the document found by Margaret, Samuel (2) was born on 26 May 1707 in Woodbridge, NJ.  The first adult mention of Samuel (2) is in the 1732 bond to Richard Carman (he would have been 25 years old), in which he is listed as a blacksmith.  Probably through family connections, Samuel (2) was appointed one of the Constables of the Township of Windsor not later than 1744, holding this post for nearly two decades until 1762.  (Remember that Joseph Bonnell was a judge on the New Jersey Supreme Court and Isaac Bonnell later became the Sheriff of Middlesex County, so the enforcement of the law appears to have been Bonnell family business.)

Samuel (2) lived in Windsor Township near Penns Neck and had at least two sons, Samuel (3) and William, when he was in his thirties.  In 1761, he purchased an inn and public house from James English, a fellow constable.  By 1763, he sold the inn and public house to Benjamin Ward, who also assumed his position as constable.  Increasingly in debt, all his possessions were confiscated by 1767, causing him to relocate to Virginia with his son William and family friends Jacob Wright (also penniless) and Peter Rossell.  The last document relating to this individual is the letter for the administration of the Estate of Jacob Wright in 1777, when he would have been 70 years old.  He probably passed away in Spotsylvania County, Virginia.

Samuel Bonnell (3):  Samuel (3) should have been born in ~1738 to start appearing in the public record as a legal adult in 1755.  He became a blacksmith like his father.  Although his father relocated to Virginia in approximately 1767, Samuel (3) stayed in New Jersey, being placed in debtors prison in 1770, when he would have been 32 years old.  This may be the individual that was in the Third New Jersey Regiment, raised in Elizabethtown and officered by Jonathan Dalton of Princeton.  (Neither Samuel (1) or Samuel (2) would have been young enough age for military service in the Revolutionary War.)  Samuel (3) appears in New Jersey legal documents as late as 1785, when he would have been 47 years old.

I welcome your comments and criticisms on the above.  There is still much work that can be done to prove or disprove this this theory and/or flesh out the details.  I'm sure at least some of this is wrong.  Some of specific the "like to knows" are as follows:

Thanks ahead of time for any help you can provide in answering these questions.  I'll try to transcribe and forward the most pertinent documents as time allows. 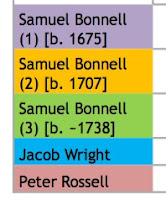 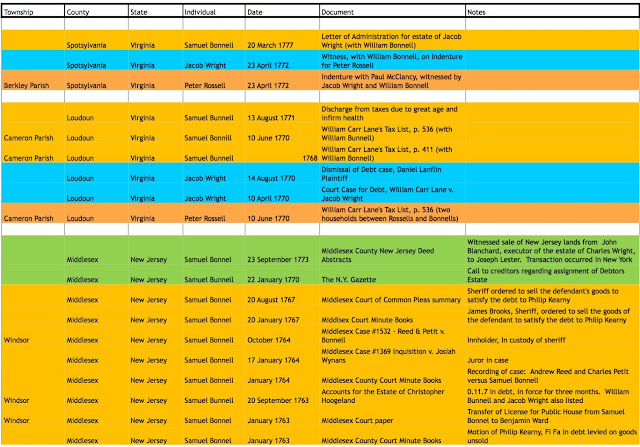 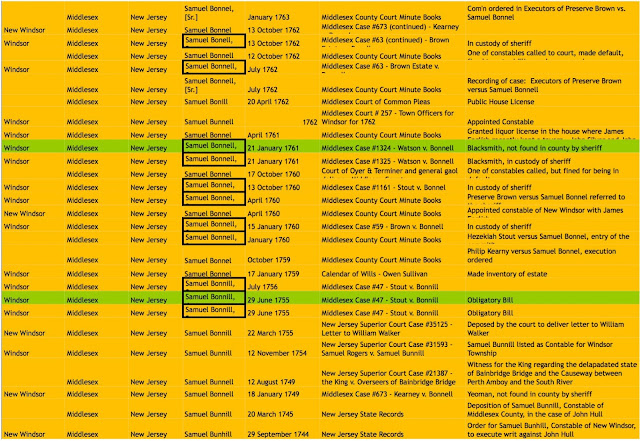 Posted by Jamboree 2022 Society Partner Volunteer at 9:13 AM