Samuel Bonnell Witness to the Will of Charles Wright


I really don't know what to make of this entry for the estate of Charles Wright.  You can see that a Samuel Bonnel was a witness to the sale of the Middlesex County, NJ property when it was consummated in New York in 1773. More than any other document, this raises far more questions than answers.
Any thoughts? 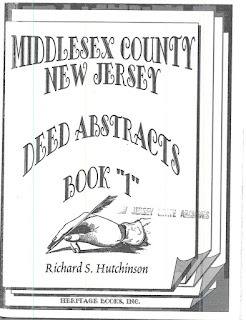 Middlesex County, New Jersey Deed Abstracts Book "1"
"These abstracts were derived from the county clerk's copies of the records at the Middlesex County Court House, in New Brunswick, New Jersey. These early deed books contain the county clerk's handwritten recordings of the deeds as they were presented to him for recording. On occasion, other documents are found recorded in these books, such as Release of Dower, Creditor's Agreements, Division of Property, etc."

[Hudson Co, New Jersey–Lee W. Jaques and J. Eugenia Jaques appeared and swore that the above land was in Middlesex Co and "was in 1895 conveyed to Jonathan Jaques by said Joseph Lester, and said Jonathan Jaques, their great grandfather, did own & Posses same. Later the above…was owned…by Robert L. Jaques, their grandfather, son of Jonathan Jaques…That the above…parcel of Rahway Salt Meadow was later owned…by Eugene A. Jaques, deceased, late of Jersey City, Hudson Co, New Jersey and that they Lee W. & J. Eugenia Jaques, are the sole surviving children of the said Eugne A. Jaques, deceased…"The deponents swore that the land has been in the possession of the Jaques family for over 100 years; Dated–31 March 1916; Recorded–31 April 1916.]

Posted by Jamboree 2022 Society Partner Volunteer at 8:52 AM