Here's John's latest report. I am reminded of the confusion my own family will probably cause our descendants as my father and my brother have the same name, Dad being II and brother being III. Occasionally one would sign documents for the other. Their signatures looked amazingly alike.

Teammates,Here is the next document off the stack.  I think this is the most important one we have seen so far and probably the most significant one I obtained in New Jersey.  I say this because it appears to me that the obligatory bill is an original document, signed by both Samuel Bonnell, Sr. and Samuel Bonnell, Jr.  Although I have sent other obligatory bills related to these individuals, the other ones appear to be transcriptions by the scribe, since the bill is written on the same piece of paper as a later court order and the handwriting is unchanged throughout the document.  This document, in contrast, is on its own sheet of paper.  Additionally, the two signatures appear to be distinct from one another and are both followed by a unique "seal" figure.

I had hoped that distinguishing between the signatures would help distinguish which Bonnell was the juror in the 1764 case. Unfortunately, I can't tell.  The signature on the 1764 document has attributes of both signatures on this document. I continue to be intrigued and somewhat baffled by the details on courtdocuments.  In this case, both Bonnells signed the 1755 obligatory bill, butthe 1756 collection case is only against the senior Samuel Bonnell.  Asbefore, it seems like the penalty for not paying your debts was severe.  Inthis case, the original debt was for twelve pounds, but the cost of notpaying on time was to incur a twenty-four pound penal debt.  This would putmodern loan sharks to shame...         John Bunnel

Middlesex Inferior Court of Common Pleas
July Term, in the year of our Lord One
Thousand Seven Hundred & Fifty Six
Middlesex fs, Samuel Bonnell Otherwise Called Samuel Bonnill Sener of The Township of Windsor and County of middlesex and province of New Jersey was Summoned To Answer Zacharia Stout of Aplea That he Render unto him The Sum of Twenty Four Pounds ~ Proclamation money Which To him he Owes and from him Unjustly Detains &ca and whereupon The said Zacharia by William Pidgeon his Attorney saith, That whereas the said Samuel The Twenty Ninth Day of June, In The year of our Lord One Thousand and Seven Hundred and Fifty Five , at Perth Amboy in the County of Middlesex, and Within the Jurisdiction of This Court by his Certain Bill Obligatory Did Acknowledge himself To be Justly Indebted Unto the said Zacharia in the Sum of Twelve Pounds Money Af’d To be paid To the said Zacharia at or before The first day of November Then Next Ensuing The Date Thereof, And For the true Payment Thereof the said Samuel Bound himself in The Penal Sum of Twenty Four pounds, Money Afores’d And The said Zacharia in fact Saith, That he the said Samuel Did not Pay Unto him the said Zacharia The said Sum of Twelve Pounds, at or before The said first day of November Which to him at or before That Same day he Ought to have Paid, According To the Form and Effect of the Bill Obligatory Afores’d Whereby an Action hath Accrued unto him The said Zacharia To Require and have of him The said Samuel The Said Sum of Twenty Four Pounds, Nevertheless The Aforesaid Samuel Altho Often Required &c’a The Afores’d Twelve Pounds unto him The said Zacharia hath not as yet Paid, but The Same To him as yet To Pay he the said Samuel hath altogether Refused and Still doth refuse and Unjustly Detain &c’a To the Damage of him the said Zacharia Stout Ten Pounds and Thereof he bring This Suit &c’a And brings hereunto Court The Bill Obligatory Aforesaid Which The Debt Aforesaid in Form Aforesaid  Wittnesseth the Date Whereof is the Same day and year Aforesaid &c’a
W. Pidgeon Quer’t } Plegy &c’a
Def’te } 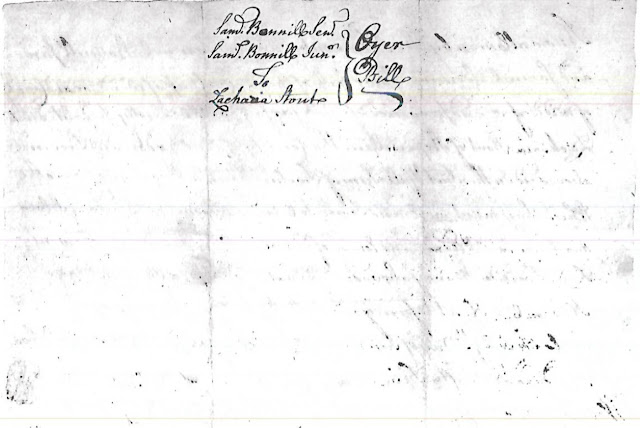 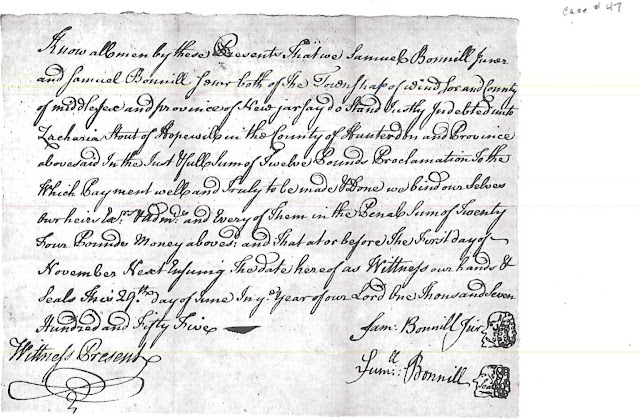 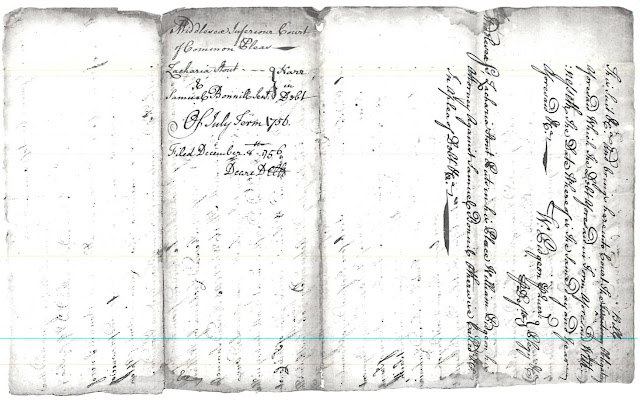 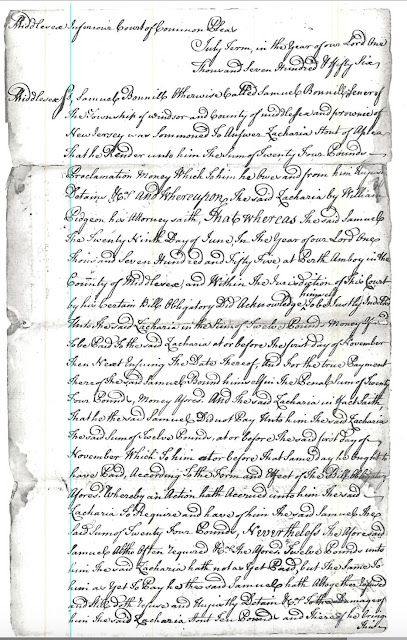