Here is a document that I do not think pertains to the Windsor Township Bonnells, but we can't rule it out since Burlington County is adjacent to Middlesex County.  Either way, it would be very helpful to positively ascertain who this family was, as much of the task we are dealing with is sorting the wheat from the chaff.  Although a secondary source, this document provides so much information, outlining three generations of Bonell or connected families that I would have to think that we could connect this to known genealogies somehow.

The will is for Francis Haines.  It appears that she was previously Francis (maiden name?) Bonell and remarried William Haines after the death of her first Bonell husband.  The document lists her children as  Thomas Bonell (eldest son), John Bonell, Hannah Haines (wife of Jeremiah Haines) with their son and daughter Robert and Frances Haines, and Samuel Bonell (executor).  This is the second reference to a Samuel Bonnell in Northampton, Burlington County, although the other one is from decades later (1783).

I already included this reference in version 3 of the chronology spreadsheet.

Francis/Frances Chanders Goodwin is the 2nd wife of Robert Bonnell (002881). Evidently he was a Quaker and his first wife, Esther Wardell, bore him no children. This is from the database. We don’t have Robert’s lineage. His son Samuel appears to have spent his whole life in Philadelphia.

This is tremendously helpful.  It tells us the Burlington County Bonells = the Gloucester County Bonells = the Philadelphia Bonells.  Also, the documentation on this family seems so complete that it effectively rules out the possibility that they were the same as the Middlesex County family.

Now we can focus directly on Middlesex County (potentially leading to Sommerset and Essex Counties) in the search for more information concerning our Samuels.  Too bad Samuel has turned out to be such a common name (including at least two sets of Seniors and Juniors at this time in NJ). 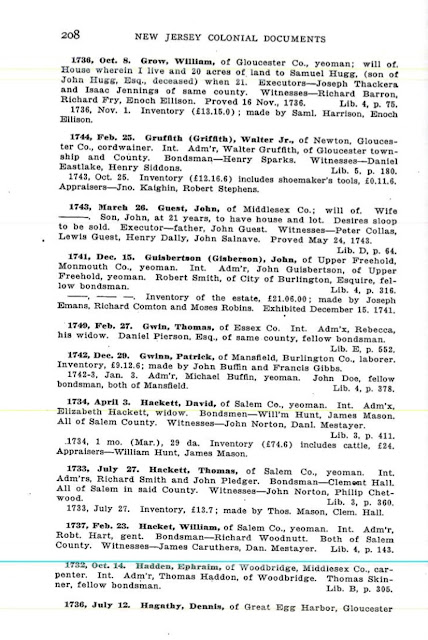 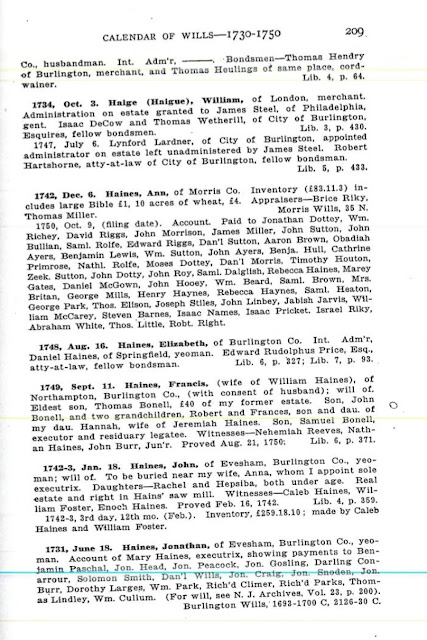