Teammates,
Here is a strange one, involving one of the Windsor Township Samuel Bonnells in a 1755 case from the New Jersey Superior Court .  In the index, the State Archives lists Samuel Bonnell as the sheriff for this incident.  Reading the document, I can't see evidence of that appointment, although there are probably some intricacies to those positions that I don't understand.
Regardless, Samuel Bonnell, at the least, was deposed by the court to deliver the attached letter to Cupid Field (in custody) to William Walker. The eviction case referenced seems pretty extreme, with the parties resorting to "swords, staves, and knives" before the court got involved.  This is another document from microfilm, so I know it is very hard to read.  I think I deciphered most of it in the attached transcription, but will gladly accept help on the words I couldn't make out.
I think the deposition is signed by Samuel Bonnell.  The handwriting and spelling of the name are clearly different then the text of the document, presumably written by a clerk.  Additionally, the signature is very similar to the juror signature in the 1764 case.
Again, frustratingly, this signature contains elements of both the Samuel Bonnell, Sr. and Samuel Bonnell, Jr. signatures on the obligatory note to the Stouts, which was signed three months after this document.  The "Sam'el" construction is similar to the older Bonnell, but the style of the "S" and the overall Bonnill signature seem more similar to the junior Bonnell.  Again, I welcome others to weigh in on this.
John Bunnell

Transcription of New Jersey Superior Court Case #35125 (1755)
Middlesex to Witt
Samuel Bonnel being duely deposed on the Holy Evangils Saith the Eighth Day of this instant March – He Served a Copy of the Within Declaration of Tresspass and Ejectment upon William Walker Tenant in Possession of the Premises within mentioned or some part thereof with a copy of the within letter, which copy both of the Declaration and Letter this Deponant then read unto him and declared unto him, and told him that it was a Declaration in Ejectment, And that if he Did not Defend his Title he would be turned our of Possession of to that Effect and further this Desponant Saith not

To Mr William Walker
Sir I am Informed that you are in Possession or Claim a Tytle to the Premises Mentioned in this Declaraion of Ejection and or to Some part thereof and Being Sued in the Action as a Casual Ejector and haveing no Claim or Tytle to the Same Do Advise you to Appear on the Third Tuesday in March next in his Majestys Supreme Court of Judicture in the City Hall in the City of Perth Amboy by Some Attorney of that Court and then and there by a Rule to be made of the Same Court to Cause Your Self to be made Defendant in my Stead otherwise I Shall Suffer a Judgement to be Entered Against me, and you will be turned out of Possession.
Your Looeing Friend 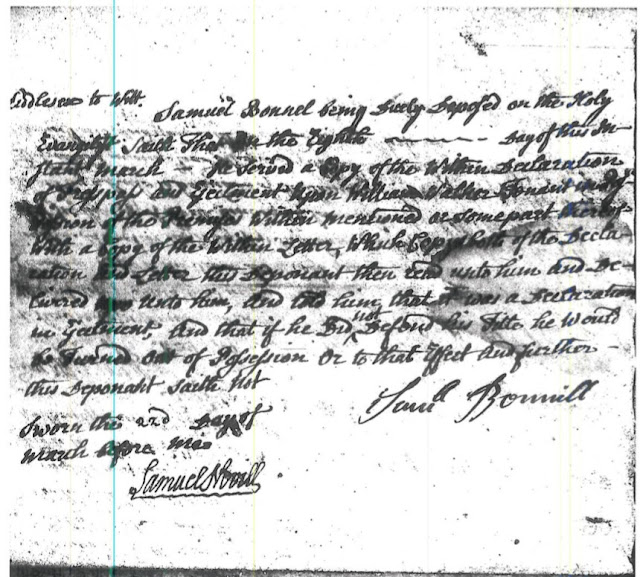 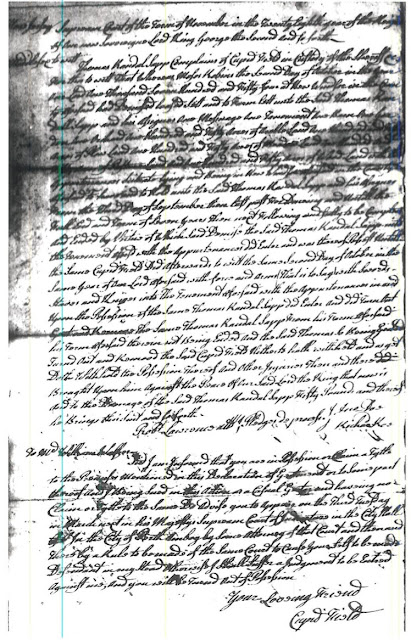 I agree that it is difficult to determine which of the Samuel Bonnills signed this document.
This case seems to be related to several similar ones that show up in the index of court cases in the NJ archives involving William Walker who lived in Maidenhead Township (now Lawrence Township).  He apparently felt that Moses Robbins' title to that property (about 500 acres total) wasn't legitimate and had his agent (Cupid Field) take forcible possession of it from the leaser, Thomas Randal (rather than Kendall) Sapp.   There were apparently other cases of disputed ownership in that area because some people bought land from the native Americans who lived there and others had land grants from the proprietors that overlapped.   Moses Robbins/Robins and his family owned a lot of land along the southeast part of Windsor and the adjoining part of Burlington County.  Much of that area is now Robbinsville Township of Mercer County.  There is a historic Robbins House that still exists there that is on property identified as E. Robbins on the 1849 map just to the right of the "W" of East Windsor.   Most of Moses Robbins' family later seemed to live just south of there around Allentown and Freehold in Burlington County.
I suspect that the property involved in this suit was somewhere in the SE part of Windsor Township.  Apparently one of the Samuel Bonnills was acting as an agent of the Court or the Sheriff in serving this order on William Walker. (Samuel Nevill, who signed Samuel Bonnill's deposition, was 2nd Justice of the Supreme/Superior Court in Perth Amboy.)  Walker may have lived just a few miles from where the Bonnells apparently lived since Maidenhead/Lawrence Township adjoined Windsor just southwest of Penns Neck.
Posted by Jamboree 2022 Society Partner Volunteer at 2:45 PM