Teammates,
My apologies, but I've now discovered that my pile is not exactly in chronological order, so this next document takes us forward again to 1762.  This is another in the continuing case between Jacob Wright and the executors of the Presence Brown estate.  Rather than a Middlesex Inferior Court Case, however, this is a case before the New Jersey Superior Court.  I don't understand what it may have required for the case to go from the county inferior court to the province superior one, but this case appears to have met whatever bar there was.  There are a couple of interesting points about this document, although I don't know that any of it is particularly helpful.
First, it lists Jacob as living in New Winsor, but in the county of Monmouth.  This is in spite of the fact that he is in the custody of the Sherriff of Middlesex.  We know that Windsor Township was near the border of several counties, but this is the first time we have seen any of our families associated with this county.
Second, this document gives us more information about the executors of the Brown estate than we've had in the past, stating that Richard and William Brown were shop keepers in Nottingham, Burlington County, while John Jones was a merchant from Philadelphia.
Third, Jacob's physical presence outlined in this document (in the custody of the Sherriff of Middlesex and the sheriff's notes address bail) narrows, slightly, the window in which he may have left New Jersey for Virginia.  Here, now, is the updated chronology on our key players:
Jacob Wright -     June 1761 (v. Brown Estate) - Cepi Corpus
May 1762 (v. Brown Executors) - In Custody of Sherriff of Middlesex
July 1766 (v. Richard Brown) - Non Est
Samuel Bonnell, Sr. -     January 1760 (v. Stout) Cepi Corpus in Cust'y
April 1760 (v. Brown ) Cepi Corpus in Cust'y
April 1761 (v. Watson) Cepi Corpus
April 1762 (v. Brown estate) Cepi Corpus in Cust'y
October 1762 (v. Brown estate) Cepi Corpus in Cust'y
Samuel Bonnell, Jr. - 1761 (v. Watson) Non Est
Samuel Bonnell (undefined) -     January 1749 (v. Kearny) Non Est Inventus
October 1764 (v. Reed & Pettit) - Cepi Corpus in Custodia
John Bunnell

The Provincial governments of New Jersey were not known for their competence.  I think this 1762 document is an example.  The Court was appointed by the Crown, both judges and clerks.  In this case whoever prepared these documents does not appear to have been very competent.  It might have been the attorney, Pidgeon, rather than the clerk who introduced the errors. There was no such thing as the Province of East New Jersey after 1702 when the two Proprietary Provinces were combined into the Province of New Jersey.  New Windsor Township became just Windsor Township in 1750 - and no part of it was ever in Monmouth County.  So all references to Monmouth in these documents should be interpreted as Middlesex.  The Superior Court that was formed when the two provinces were combined alternated sessions between Burlington and Perth Amboy which had been the seats of government of the former West New Jersey and East New Jersey respectively.

The Nottingham Township of Burlington County included the area around Bordentown.  That township was later abolished and  the area became part of Mercer County in 1838.  It is now South Trenton and Hamilton Township.  Preserve Brown and his family were Quakers and members of the Monthly Meeting that met at Bordentown.  His and his successors shops may have been in Bordentown.   However, the original settlement in Nottingham Township was at the unincorporated community of Nottingham in current Hamilton Township and the shop may have been there. Both Jacob Wright and the two Samuel Bonnells were obviously in debt to Preserve Brown and his estate and were unable to pay up.

I also wonder about the notation that this writ was filed de bene esse.  In this usage I think that meant that it was provisional. Perhaps that just meant that if Jacob paid the debt before the court session he wouldn't be required to show up in Burlington.  In any case, from the later documents it's clear that he couldn't pay and left the jurisdiction before 1766.  Some people in trouble in NJ in those days just moved across the river into Bucks Co. PA.  Jacob Wright may have done that before joining the Bonnells in moving to Loudoun Co. VA in 1768.

Transcription of New Jersey Superior Court Case #5654 (1762):  Brown, Richard; Brown, William; Jones, John (Executor of Preserve Brown) v. Wright, Jacob
New Jersey fs. George the third by the Grace of God of Great Britain France and Ireland King Defender of the faith &c  To our Sheriff of our County Middlesex – Greeting we Command You That You Take Jacob Wright otherwise called Jacob Wright of the Township of New winsor in the County Monmouth & Province of East New Jersey Farmer if within your Bailiwick he may be found and him safely keep so that you May have his Body before us at our city of Burlington on The Second Tuesday in May Next To answer Richard Brown William Brown and John Jones of a Plea of Trespass And Also to the Bill of them the said Richard Brown William Brown and John Jones Against him the said Jacob for Twenty Nine Pounds Seventeen Shillings and Six Pence current Lawful Money of New Jersey __ ___ According To the motion of our Court before us then and there To be Exhibited and have you then and there this writt  Witness Robert Hunter Morris Esq’r ___ of Justice at our City of Perth Amboy the Twentieth Day of March in the Second Year of our Reign
Pidgeon Att’y of Plffs Readr

Know all men by these Presents That I Jacob Wright of the Township of Newwinsor in the County of Monmouth & Province of East New Jersey Farmer Am held & Firmly Bound unto Richard Brown & William Brown of the Township of Nottingham in the County of Burlington in West Jersey Shop keeper & John Jones of Philad’a Merch’t in the Just and Full Sum of Twenty Nine Pounds Seventeen Shillings & Six Pence Current Lawful Money of N. Jersey to be p’d to the s’d Rich’d Brown William Brown & John Jones or Either of them or their Heirs Ex’rs adm’trs or assigns for which Payment well & Truly To be made I Bind my self my heirs Ex’rs & adm’trs firmly by these Presents Sealed with my Seal Dated this Twenty Sixth Day of June in the Year of our Lord one thousand Seven Hundred & Sixty one 1761


In the Presence of us } 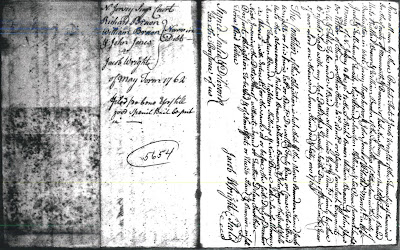 New Jersey Sup. Court of May Term in the Year of our Lord one
Thousand Seven Hundred & Sixty Two

Middlesex fs. Richard Brown William Brown & John Jones Complains of Jacob Wright otherwise Called Jacob Wright of the Township of New winsor In the County of Monmouth & Province of East New Jersey Farmer in Custody &c of the High Sherriff of the County of Middlesex of a Plea That he Render unto then the Sum of Twenty Nine Pounds Seventeen Shillings & Six Pence Current Lawful money of New Jersey which To them he owes & from then unjustly Detains &c’a For that /towit/ That whereas the said Jacob the Twenty Sixth Day of June in the Year of Our Lord one thousand Seven Hundred & Sixty one at Perth Amboy In the County of Middlesex Afores’d by his Certain Writing obligatory with the Seal of him the Said Jacob Sealed and To the Court of our Lord The King Now here Shawn the Date whereof is the Same Day Year Last Afores’d Acknowledged himself To be Held & Firmly Bound unto the Said Richard Brown William Brown & John Jones in the Afores’d Twenty Nine Pounds Seventeen Shillings & Six Pence nomey Afores’d To be paid To the Same Richard William and John when the s’d Jacob Should be Thereunto Afterward Required Nevertheless the said Jacob Altho often Required &c the Afores’d Sum of Twenty Nine Pounds Seventeen Shillings and Six Pence To the Afores’d Richard William & John Hath Not as Yet Paid But the same to the the s’d Richard William & john To Pay To Pay He the s’d John Hether to Altogether Hath Refused and Still Doth Refuse & Unjustly Detain &c’a To the Damage of them the s’d Richard William and John Twenty Pounds money Afores’d and then of they Brings Suit &c
Pidgeon Qicor’t } Pligw
Defend    } &c

Middlesex fs. Richard Brown William Brown & john Jones Puts in Their Place William Pidgeon their Attorney Against Jacob Wright otherwise Called Jacob Wright of the Township of New Winsor in the County of Monmouth & Province of East New Jersey Farmer In a Plea of Debt &c’a 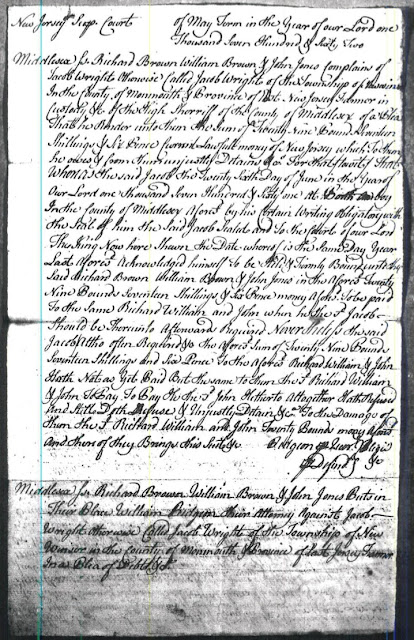